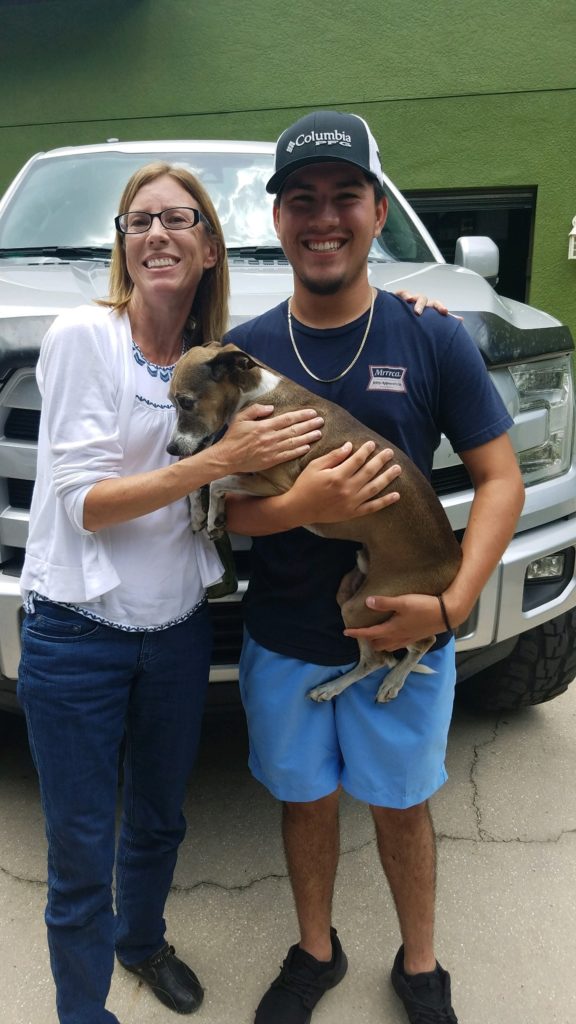 Story: Operation #BringOtisHome is a Success!

Over the July 4th weekend, Kristy Leto, our Chief Financial Officer, was enjoying a holiday getaway with her family. Little did the family know that their neighbor had decided to blow up a donated car on Saturday July 6th, causing terror for their dog, Otis. The noise was so loud that the houses near the explosion shook, and Otis went missing that Saturday night.

The family immediately began their search for Otis. Kristy shared her pup’s info everywhere on the internet she could, put up Lost Dog signs around Myakka City, FL and Bradenton, and asked their friends, family, and coworkers to be on the lookout during their daily commutes.

She even met with 10News WTSP to share her story in the hopes of finding a lead for Otis’s whereabouts. Campaign #BringOtisHome was fully underway.

It wasn’t until 6 days later that Kristy received any news about her dog. The family learned that Otis was picked up on Saturday 7/6 at Desoto Speedway by a man on his way home to Lakeland, FL – over 60 miles away.

The gentleman attempted to give Otis shelter at his home until he could find the dog’s owner. However, Otis was shy of strangers and ran from the man when they arrived in Lakeland.

Otis was now too far away from home to make it back on his own.

Kristy and her family, however, were not giving up hope. They continued to share flyers on social media with #BringOtisHome and drove all the way to Lakeland to put up flyers all over the city.

On Monday 7/15, over a week and a half after Otis’s disappearance, Kristy received a lead. The dog was spotted and picked up by a nice boy in Plant City, FL – a long way from Lakeland. The boy saw a poster that Kristy put up in Lakeland over weekend and reached out.

The family sheltering Otis was a little sad to see him go. They said Otis was very excited when they called him Otis that day and asked where Kristy and Jeff were. He began running around the house looking for his family.

Kristy and her family are overjoyed to have Otis back home! Although Otis didn’t cover miles quite like our fantastic trucking partners, he sure was trucking along in his 60 plus mile adventure away from home!

Operation #BringOtisHome was a success!